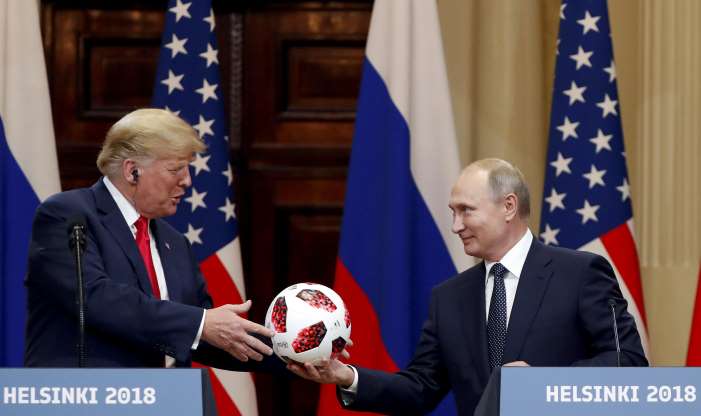 The press conference between President Trump and President Putin brought many negative comments from the same crowd that deny President Trump any kind of sensible thinking, the pundits in the press the Left and some Republicans, they all know better how President Trump must act and what President Trump must say there is only a caveat to that thinking, there is only one President Trump and he has the right to make their own decisions and present himself the way he seems proper. Let us analyze some of the questions, answers and comments of the anti-President Trump pundits on the left, the right, the press and even Republicans:
CNN’s Anderson Cooper called it “perhaps one of the most disgraceful performances by an American president”
Mr. Cooper is now trending in social media for this clever comment on President Trump performance, the fact that President Trump had been under siege by the press since he announced his candidacy to President of the USA and the incredible bias of most of the press against him of course have nothing to do with Mr. Cooper’s comment and the fact that President Trump called out again and again the lies, false statements, distortions of his words and all kind of fakes news the President have to face everyday by a very contrarian, aggressive and bias press corps. Plain Americans in the USA see this kind of expression to a sitting American President very disgraceful as there is not intent at explaining the reasons of that comment just because President Trump made those remarks they must be bad.
Williams then read a tweet from ex-CIA Director John Brennan, who called the performance “nothing short of treasonous.”
Mr. Brennan is a former director of the CIA and he had been making all kind of derogatory comments against President Trump, does this explain the answer President Trump gave when asked if he believes Russia or USA intelligence agencies. President Trump had been gracious in answering it vaguely instead of a blunt evident answer. Who could believe the CIA under Mr. Brennan leadership? who could believe the FBI under Mr. Comey and DOJ under tarmac Lynch or Fast and Furious Mr. Eric Holder?. No, we do not believe in Obama’s intelligence agencies and it leftovers into President Trump presidency.

Top Republicans in Congress break with Trump over Putin comments
I just going to name those top Republican: Ryan, Corker, Flake. We the People do not have to even remember their names as none is going for reelection next November.

Now question from reporters:
Mr. Putin do you have dirt on President Trump or his family?
This is a disgraceful disrespectful question in front of the whole word and in presence of first lady Melania Trump. Up to what extent is the press willing to discredit themselves, what could President Putin answer: yes, we have a lot of dirt on your President, we will use it any time to make him lift sanctions on Russia, avoid the killing of Russia mercenaries in Syria, stop expelling Russia diplomat from the USA and by the way Miss Melania we have nice pictures of President Trump with beautiful Russian girls.
Mr. Putin did Russia meddle in 2016 USA elections?
To a stupid question a stupid answer, do not expect less either from President Trump or President Putin.
We, in the USA, need to go back to the times in which after we elect a President we treat the presidency with respect, there is a President there trying the best for America, is that is not the case we vote him/her out.
Next November We the People must get in congress intelligent, committed and respectful Americans that love our country and will have the courage of helping Venezuela and Nicaragua and rescuing a free press that impartially report the true.