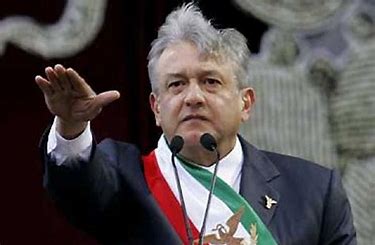 The new president of Mexico after the election there next July 2018 is most likely to be Mr. Lopez Obrador(LO).
LO is a left-wing radical, brewed by Cuba, the sponsor of a set of the worst tyrants in the history of South and Central America the most notorious Hugo Chavez responsible for the destruction of Venezuela and the creator of a narco government there that will not go out despite people dying from starvation, lack of medicine, crime, drugs and the total destruction of the education, health and industry. There are some other examples of those left-wing Cuban backed leaders: Evo Morales(Bolivia), Correa(Ecuador), Ortega (currently killing his own people in Nicaragua/ Ortega dictator).

We do not have to go too much back on time to learn the consequences of electing those leaders, this is modern history and happen in Venezuela and will happen in Mexico too:
• The right of citizen to bears arms will be forbidden. In Mexico, one of the worst criminal states this item is checked already. Only corrupt people in the army, police, politician and narcos can carry and freely use those arms again law-abiding people.
• The government will be run by drug cartel. In Mexico this is also a checked point, is not a secret that the current government and sure the next one is and will be run by drug cartel
• Nationalization of industry with the object of bankruptcy them and create more dependency from people already in a very fragile condition
• To negotiate with narcos and drug producing peasants to decriminalize the industry that provide drugs to the USA (Lopez Obrador next Mexican President )
• In traducing changes to the constitution to get the right to perpetual permanency in power
• Corrupting any statement of government and industry

Those above are just a few of the action taken in Venezuela and will be implemented by LO in Mexico with devastating consequences.
The Wall, now imagine the southern border of the USA when those events take place in Mexico can anyone visualize the border then, thousand of people crossing in desperation the border towards the USA, among them, thousand of criminal and drug trafficking lords who will be protected by our laws and law enforcement people to conduct their corruption and criminal activities in the safety of the USA., you can see a very small example of this happening right now, 05/30/2018 with the caravan of migrants from central America desperately trying to get into the USA and there is nothing we can do to stop them.
Unfortunately, this situation can only be solved by new laws in the congress that we all know is not going to happen unless we have a red tide next November that takes to congress honorable Americans that work with the president to enact laws that protect our country. I lost my country of origin already (Venezuela) I do not want to lose my new country the USA.